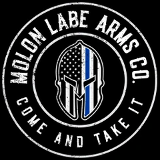 Would you like to be notified when this item is back in stock?

Hudson's H9 is motivated by the past and inspired by the future. Key features of this patented configuration include a low bore axis, 1911-style straight pull trigger, and lowered recoil spring placement for a pistol that does not require an off-axis firing technique and achieves a flatter shooting platform. The low bore axis is achieved with the striker-fired system and placing the barrel camming surfaces forward of the trigger guard. Along with the recoil spring placement in front of the trigger guard, it reduces torque on the wrist for better control. The linear 1911-style trigger minimizes disruptive trigger finger movement during the firing sequence to maintain greater control and more consistent follow-up shots. The lack of a hammer spring allows a more slimline and higher grip on the pistol giving the shooter more control while diminishing felt recoil. Note: Due to the low bore axis, the H9 is not compatible with other magazine designs. The H9 has an all-steel frame with an accessory rail, integral trigger safety, ambidextrous slide release, and a reversible magazine release. The H9 also features a G10 Hogue lower backstrap, G10 VZ interchangeable grip panels, Trijicon HD front sight with a black serrated rear sight, and a stealthy black finish. This model includes three 15-round 9mm magazines.